Aggressive stimulus and labor market tightening mean higher inflation risk
KEY INSIGHTS
Asset and commodity prices have been moving in line with the view that supply constraints and a weaker US dollar are putting incipient pressure on underlying inflation trends. Contrary to the widely held consensus view, we believe inflation pressures are likely to accelerate substantially as 2021 progresses.

The consensus view is that inflation will peak around April or May of this year, largely because of base effects in which inflation has been weak immediately in the wake of the coronavirus pandemic, and energy prices have also slumped. Base effects alone are expected to lift headline consumer price index (CPI) inflation1 by about 100 basis points to over 2.75%. If the headline CPI rises in line with history, annual inflation could conceivably top 3% by May.

Central bank officials have noted that they, too, expect inflation to drift up solidly in the coming months. Yet, they’ve indicated that they are going to look through this. Federal Reserve Chair Jerome Powell recently expressed no concern about a sell-off in bonds and provided no indication of policy changes ahead. The Fed has further indicated it is unlikely to act, even if inflation rises temporarily to 3% or 3.5%. As a result, we expect that markets will not get too excited about US near term inflation prints potentially above 2%.

These five observations on inflation will be important to note for investors because we feel that markets are unprepared for and have not yet priced in a cyclical inflation shock. From the bond market, forward inflation swaps are still only pricing a muted inflation recovery. The five year, five year forward rate (5Y5Y) on inflation swaps is only around 2.4%. And this already includes the well known rise in inflation because of base effects. Models of the inflation risk premium show that the compensation demanded for future inflation is near record lows from which it can only rise, in our view.

Unexpected inflation is a risk for many investors who might have underinvested in real assets and other inflation-sensitive assets. A review of allocations to inflation hedges like real assets may be considered in case inflation remains higher for longer.

1. Starting conditions not as bad as in previous recessions The starting conditions for inflation are much stronger now than during past recessions. Headline CPI inflation appears out of step with its typical cyclical behavior (see Figure 1). In recessions historically, CPI inflation typically falls sharply, as does the broader price pressure indicator. In 2020, however, headline inflation only fell a little while broader measures of price pressures rose through the year. From this, we deduce that sequential inflation may now rise significantly, especially since many commodity prices (food, metals, and energy) have increased 30% to 40% since the fourth quarter of 2020, according to the Goldman Sachs Commodity price indices (GSCI). Energy prices, in particular, feed rapidly into headline CPI inflation.

Demographic changes imply that the trend labor force participation rate is only around 1.5% above the current level. This leaves little scope for a large pool of labor to weigh on wages, unlike the labor market dynamics in the 2010s, when the participation rate was higher. Any further improvements will likely continue to eat into current labor market slack, leaving the economy exposed to insufficient supply when demand returns, forcing employers to compete for labor via higher wages. 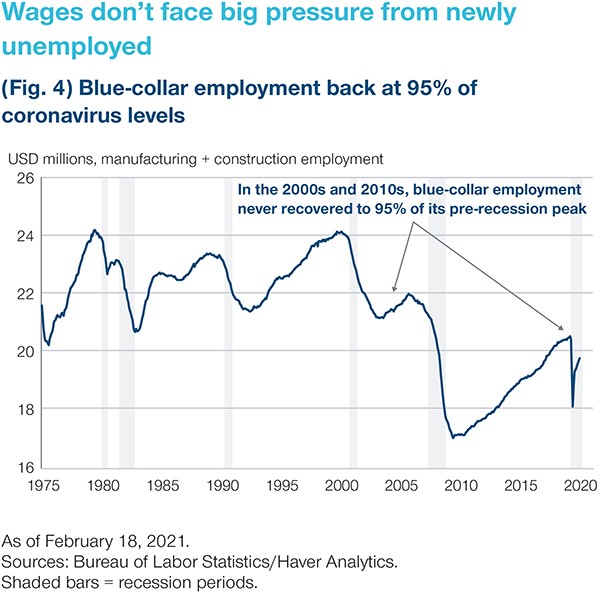 Estimates suggest that online shopping, working from home, and other social changes triggered by the coronavirus have brought forward a decade of innovation. This has benefited companies on the right side of this change, but many businesses that were adversely affected have been shut permanently, reducing overall capacity. Cyclically, this has resulted in a very sharp fall in retail inventories, especially of autos. As demand recovers, we think the associated restocking could add over USD 500 billion, potentially boosting US real gross domestic product (GDP) growth by around 5% to 6% per quarter over several quarters, likely returning GDP to its pre crisis trend level faster than many expect and closing the output gap.

2. Rapid labor market tightening From a labor market perspective, the coronavirus shock was very unusual compared with previous recessions. Traditionally, unemployment rockets higher but then falls like a feather during a typical recession/recovery; rising sharply in the first three months of the recession, but then taking two years – or longer – to return to more normal levels of unemployment.

Labor markets are currently tightening at a historically rapid pace, both thanks to rehiring as economies reopen and as an aging population leads to a shrinking working population. By any standard, the current unemployment rate of 6.75% is not typically seen until two to four years after the end of a recession (Figure 3). This time appears to be different. In 2020, it took only eight months for the unemployment rate to get back to 6.75%, and it looks like it could be under 6% by mid 2021.

Labor markets are currently tightening at a historically rapid pace…
The pandemic shock is more like the recessions after WWII and the Korean War. Unemployment surged then, and professional economists worried that mass demobilizations would push us back into 1930s-style deflation. However, what they missed was that these shocks induced large shifts that drove demand in sectors that had seen little investment. As a result, unemployment swiftly fell and inflation surged, as the postwar economy struggled to adjust to the lack of labor and inadequate supply in new areas of demand.

Finally, we would also observe that the pandemic shock was unusual because of who lost their jobs. Usually, the manufacturing and construction sectors – sources of skilled blue collar labor – suffer the most and take the longest to recover. Indeed, after the 2001 and 2008 recessions, blue collar employment never recovered, as proxied by the total number of workers in US manufacturing. By contrast, in 2020, blue collar employment has snapped back quickly.

Consequently, we think there is likely to be less downward pressure on wages from high unemployment as compared with the 2000s and 2010s. In the first two decades of this century, many blue collar workers were forced to take lower-paying service sector jobs, competing with workers already in those industries and driving down wages. After the coronavirus shock, by contrast, manufacturing employment quickly recovered to over 95% of its pre crisis level (Figure 4). With generous support from Social Security safety nets, the remaining unemployed blue collar workers have fewer incentives to seek work in the coronavirus exposed consumer services sectors like entertainment or hospitality at much lower wage rates.

3. Past underinvestment in commodities The commodity sector has also seen weak investment in recent years, suggesting supply conditions could tighten further in 2021 as demand increases amid recovery. Capital discipline in the mining industry, for example, has limited new capex spending, providing producers with pricing power. There are few signs that the recent runup in iron ore prices is prompting a capex response.

Investment in energy (as proxied by the Baker Hughes Rig Count) has also been weak. The surfeit of oil rigs means US oil production would likely be slow to respond to a recovery in demand. With current oil consumption about 2 million barrels (per day) above production, inventories are likely to start falling quite rapidly. Moreover, the recent OPEC+ agreement brokered by Saudi Arabia shows a surprising degree of production discipline by oil producers, at least until midyear.

Given this discipline, commodity prices have unsurprisingly surged. These higher raw material input costs should start to feed into sequential inflationary pressures in the coming months.

4. Rising current account deficit in recession/Inadequate supply At the macro level, the widening US current account deficit during a recession tells us there is insufficient domestic supply to meet domestic demand (Figure 5). Traditionally, the external balance improves during a recession, reflecting a shortfall of domestic consumption. Currently, however, consumption has accelerated beyond the ability of the economy to meet demand. We believe this very large positive fiscal impulse in 2021 will erode labor market slack ever more quickly. A continued rebound would inevitably see a further widening of the deficit, especially since the US runs a deficit in autos (where there has been a key supply shortfall). At the same time, global capacity is also tighter than in the mid 2000s, as repeated rounds of Chinese supply cuts are leaving Chinese producers with less spare factory capacity. Also, most incremental investment today is going to service depreciation rather than new greenfield productive capacity. As a result, China may become less of a source of global deflation pressures than in the past.

5. Large positive fiscal impulse in 2021 The recently signed American Rescue Plan Act of 2021 (also called the COVID 19 Stimulus Package) should accelerate the recovery even more as the relief provisions are overwhelmingly geared toward low income and middle class Americans who are more likely to spend. The USD 1.9 trillion package will also be largely spent within 2021. We regard the US economy as already closing its output gap and running tighter than many commentators suspect. These forces were already well in train before the initial impact of fiscal stimulus had been felt. We believe this very large positive fiscal impulse in 2021 will erode labor market slack ever more quickly.

Internationally, non oil commodity demand is strong, buoyed by the recovery in global trade and domestic Chinese demand, especially for infrastructure and housing, which are expected to remain resilient in 2021. Globally, the quantity of fiscal stimulus has been less in the eurozone and China compared with America. While demand has slowed more sharply in Europe, Chinese growth has remained resilient and is already back to its pre pandemic trend, which reduces the risk of deflation pressure building. 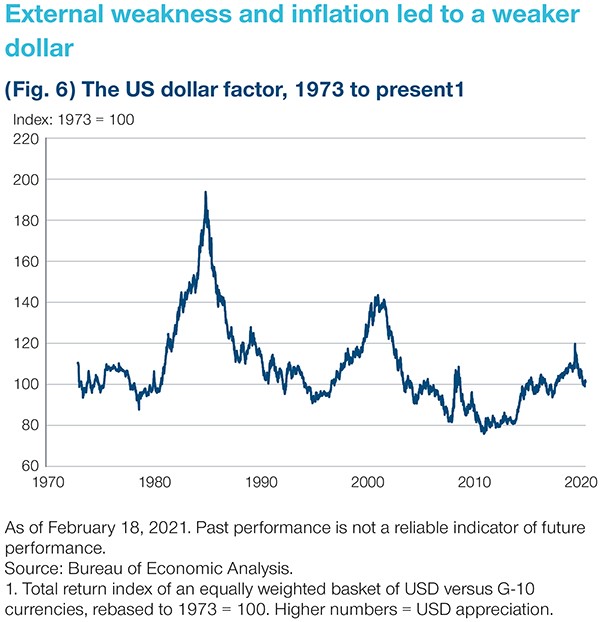 What are the risks to our non consensus view?
1. Vaccine versus mutations In the near term, renewed worries about the coronavirus could come back to weigh on economic activity. In Europe and China, the authorities renewed travel and quarantine restrictions as new waves of infections peaked. There are worries that new mutations of the virus potentially could reduce the efficacy of vaccines, though, so far, there is thankfully no evidence of this.

2. Long term trends There have been significant structural forces that explain the low inflationary environment. Globalization, productivity enhancements in oil production, and price discovery enabled by technology will not disappear anytime soon. This might lead to lower inflationary pressures than expected.

3. Long term trends We are also watching credit developments in China as policy over tightening there would be a key risk to the global inflation outlook. The coordinated central bank easing in 2020 saw a modest uplift in credit but came on the back of fiscal stimulus that was four times the size of the fiscal boost during the GFC. This helped to buoy consumer spending and employment in 2020. Additionally, the mix of fiscal and monetary stimulus in developed markets is unlike the mid 2010s, when we saw fiscal tightening offsetting central bank easing – a mix that preempted an enduring recovery in commodities. The current policy stance, if sustained in 2021, should help to support a strong recovery in real assets, unlike in the 2010s.
Price pressures in the US are also likely to receive a modest fillip from a weaker currency.

4. Stronger US dollar Price pressures in the US are also likely to receive a modest fillip from a weaker currency. There are longer term pressures for the US dollar to decline, owing to narrowing growth and interest rate differentials, high US fiscal and current account deficits, and ample US dollar liquidity. However, if the US dollar appreciates on the back of a roaring economy, inflation might be tempered.
1 Headline CPI inflation excludes potentially volatile food and energy prices and is regarded as a better measure of the underlying trend in inflation.